In 1983, pioneer wine grape growers Dr. Dudley Page, and his wife Annie, decided that Finley Point, which is an ancient glacial terminal moraine jutting out into beautiful Flathead Lake, might be a great site to grow wine grapes. This is because Flathead Lake, which is 28 miles long and 15 miles wide, the largest freshwater lake west of the Mississippi, creates its own weather patterns, which moderate Montana’s otherwise harsh winters and hot summers.

After much trial and error, Dudley and Annie settled on Pinot Noir as their chosen varietal, and by 1990 they had 3 ½ acres of Pinot Noir planted and producing.  Almost 20 years later, the constant work of maintaining a producing vineyard began to wear on the Pages, and they decided to sell part of the vineyard in 2008 to us, who wanted to return to Montana, after working in Denver for 20 years.

Unfortunately, in 2013, after a warm February, a hard March frost killed all the Pinot Noir vines.   Rather than replace the Pinot Noirs, we decided to try a hardy hybrid varietal, which had Pinot Noir has one of its parents, and which was called Marquette.  In 2015, we also planted a newly arrived white varietal from Nova Scotia called L’Acadie Blanc. 2016 was the first full year of production for the Marquette vines, and 2017 produced our first L'Acadie Blanc.

In 2014, we also cleared a ¼ acre of third growth young pine above the vineyards, and planted lavender. We had our first producing flowers in the summer of 2016, and since then things have just blossomed. We now offer u-pick lavender and lavender distillation workshops in July.

The grapes have continued to flourish also, and our wines can be purchased at White Raven Winery in Columbia Falls, MT.  I would particularly recommend the L'Acadie Blanc. 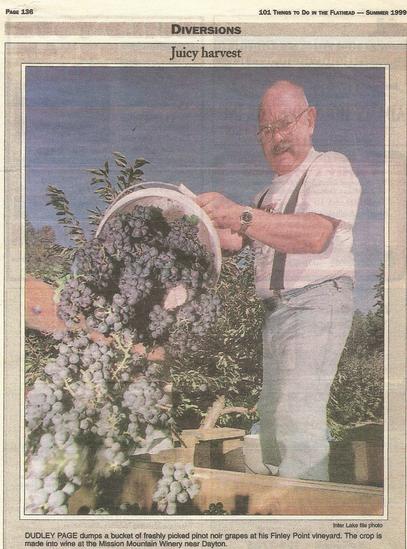